Donald Trump didn’t directly kill Ashli Babbitt, but as Rep. Zoe Lofgren pointed out, he incited the riot that led to her death.

1/6 Committee member, Rep. Zoe Lofgren puts the pieces together to show how Trump incited the death of Ashli Babbitt. https://t.co/7lHAGg0I5U 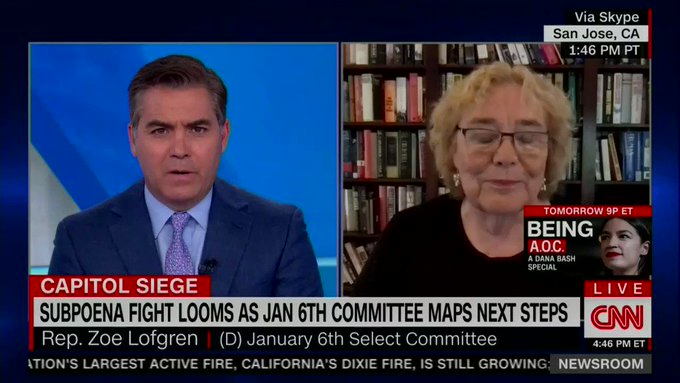 Rep. Zoe Lofgren (D-CA) told CNN’s Jim Acosta, Well, you never want to see someone lose their life, of course. However, she was part of a mob, and she was breaking into the Speaker’s gallery through a window, having been told not to do it. At the other hallway, about 35 feet, there were 100 or so members of congress escaping down a flight of stairs. So the officer who did — who stopped her with a bullet was fully exonerated after an investigation. And that doesn’t mean that it’s a good thing that she lost her life. I feel badly that that happened. And I wish she hadn’t been convinced by conspiracy theorists that what she was doing was the right thing to do. It’s tragic.

Acosta asked if she thinks Trump is responsible for Babbitt’s death, and Lofgren answered, “Well, I just want to say, very many of the people who fought our police officers and who invaded the Capitol shouting “Hang Mike Pence” said they were doing it at the request of the president. He gave a stem-winder of a speech urging the crowd to fight. They did that. I think as we proceed further, we’ll get a further picture, a complete picture, hopefully, of all the events that led up to January 6th and the insurrection.”

Babbitt Would Probably Still Be Alive If Trump Had Not Incited The Capitol Attack.

As the evidence mounts about Trump’s conduct and mindset before 1/6, it is clear that the attack was not a political rally that got out of control. Trump wanted the Capitol attacked. His supporters got the message loud and clear.

If Trump was a normal human being who lost a presidential election, he doesn’t incite the Capitol attack, Babbitt doesn’t go through that window, and she is probably alive today.

The far-right is martyring a woman who Donald Trump helped to kill.  Ashli Babbitt did what Trump wanted, and she lost her life.